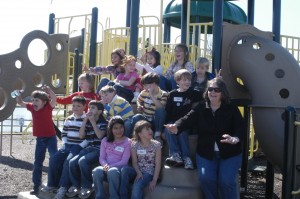 A school field trip can only be as fun and exciting as the people who participate in it.
Students from area nursing and allied health schools made a most recent experience come to life with the help of volunteers from the Baptist Health System.

First-graders from Lowndes Academy and the tri-county area had the opportunity of being entertained at the Let’s Pretend Hospital in Montgomery on Friday, March 5.

The day began as children filed into their chaperoned vehicles at the school to make way to the Institute for Patient Safety and Medical Simulation.

“This is a great opportunity for the children to take a break from class and see how hospitals actually function,” said first-grade teacher Michelle Rogers.

Sponsored by the Baptist Medical Center Auxiliary, the program lasted about 90 minutes and introduced students to a hospital atmosphere with “pretend” rooms.

The stations simulated everything from emergency facilities to nurseries which utilized actual hospital equipment.

First-graders played the role of mother, father and patient as nurses and volunteers would explain the steps hospitals take to ensure the safety of their patients.

Parents laughed as they watched the children interact with life-like mannequins that occupied the facility’s beds. The dummies simulated blinking, breathing and responding to nurse’s questions.

“The children had lots of fun and got to see what it was like at a hospital,” said Desi Marvin, mother of first-grader Carley Marvin.

The goal of the program is to enlighten children about the mechanics of a hospital atmosphere in a non-threatening manner while making it fun and educational.

Children were led from room to room with their classmates while students and volunteers from area health schools explained the function of x-rays, anesthetics, breathing machines and other medical equipment.

Before leaving the facility, the first graders paid their hospital bills with “play” money prior to being led into an ambulance where workers demonstrated the vehicles emergency sirens.